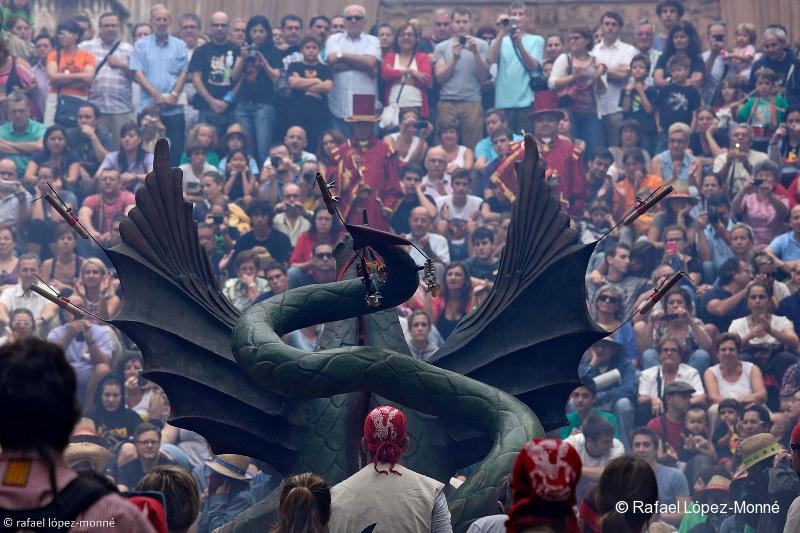 With more than 500 events over eleven days of celebrations, navigating the Santa Tecla programme can be a challenging task for those who are new to the festive universe of Tarragona. That’s why we’re offering a brief guide to the ten essential experiences for enjoying Santa Tecla to the full, plus ten alternative options for those looking for something a little different, or who simply want to escape the crowds.

The festival of Santa Tecla, which has been declared of National Tourist Interest by Spain and a Heritage Festival of National Interest by the Government of Catalonia, has been held in Tarragona since the fourteenth century and offers a unique opportunity to get to know the city and, above all, its people. Get your festival T-shirt ready, put on some comfy shoes, pop a hat on your head to protect you from the sun and the sparks from the fires, and let’s go!

A true follower of Santa Tecla (teclero) can be identified by what they eat as well! The quintessential dish is espineta amb cargolins (tuna stew with snails), which is the breakfast of choice for tecleros on the morning of 23 September. And for dessert? Obviously, Braç de Santa Tecla (Santa Tecla’s Arm), but in the form of a cake. This popular treat is made to order by many of the city’s bakeries on the afternoon of 20 September.

Don’t fancy the look of the espineta? Don’t worry, during Santa Tecla you’ll find as many gastronomic options as there are different tastes. Days such as the first Saturday of the festivities are full of tasting sessions which will take your taste-buds on a fascinating journey, and the Tecla Tapa is great quick dinner option during the festivities.

The best way of appreciating the figure of the patron saint of Tarragona is through the Tableau of Santa Tecla, which is performed every 20 September by the Esbart de Santa Tecla theatre group inside the Cathedral. With the audience facing away from the altar, through gestures and music they portray the most important scenes in the life, martyrdom and death of Tecla.

If you fancy something different, the programme features numerous guided tours of the Cathedral which give a closer insight into the figure of Santa Tecla and the temple that was raised in her honour. The festivities offer the perfect opportunity to rediscover Tarragona’s medieval heritage from another perspective.

A great part of the participative heart and soul of Santa Tecla can be found in the Seguici Popular (popular retinue), a long street procession comprising fire-runners, fantastical creatures, ‘spoken dances’, giants, allegorical dances, etc. The Seguici does three full processions during the two main days of the festival: on the afternoon of 22 September, the Anada i Tornada a Ofici (Round Trip) on the morning of 23 September, and another procession on the afternoon of 23 September. There can be no more traditional spot to enjoy the procession than on the steps of Plaça de les Cols, but make sure you set aside at least two hours to watch the full procession.

Are you short of time, or perhaps you don’t like crowds? The procession route offers many less crowded options and some where you have the chance to watch it from a different perspective or catch a one-off dance being performed or other off-programme events. If you don’t mind getting up early, the Anada a Ofici procession on 23 September is the perfect time to see the Seguici away from the crowds and offers some great photo opportunities.

On the night of 21 September, a number of fantastical creatures and giants perform a double descent from the Cathedral to Plaça del Rei and as far as Plaça de la Font. To really experience it to the utmost you need to join the descent crew of a particular element and wait your turn to enjoy the unique opportunity to carry them. If you’re interested, the best thing is to ask the advice of an experienced local resident to help you get fully involved, but be sure to always respect the elements and their bearers.

Is the madness of the Baixada a little too much for you? You can enjoy it from a safe distance at points such as Plaça del Fòrum or, even better, during the second Baixada from Plaça del Rei to Plaça de la Font. Or if you’d rather watch the processional characters in daylight hours, the fifteen minutes before each departure are preceded by a short performance in Plaça de la Font.

A city with such a long-standing human tower building tradition as Tarragona can hardly ignore its colles castelleres (tower-building teams) during its most important annual festivity. For this reason, Santa Tecla features two of the most important casteller sessions of the year: the first Sunday of the festivities (with two guest colles from outside the city), and on the day of Santa Tecla itself, featuring four local colles. Your Santa Tecla experience will not be complete until you have marvelled at a human tower building session in Plaça de la Font, perhaps with a local aperitif in your hand!

Are you looking for a more intimate experience of human tower building? During the festivities, all the colles offer open rehearsals at their headquarters, free of charge and with no need to book in advance, so you can appreciate how they get ready for this red letter day in their diaries.

Satire is an indispensable ingredient of Santa Tecla and its ‘spoken dances’ are responsible for keeping it alive year after year. The must-see revue is one of the performances by the Dames i Vells (Ladies and Old Men) on 22, 23 and 24 September, a searing review of current affairs that puts more than one person in their place!

The popularity of Dames i Vells means that it is sometimes difficult to get a good place from which to see them. Don’t worry, though, as the sardonic fun permeates the rest of the city, and on 22 and 23 September you can laugh along with the satirical utterances at the Ball de Diables (Devils’ Dance), Ball d’en Serrallonga (Serrallonga Dance), Ball de Gitanes (Gypsies’ Dance) and Ball de Pastorets (Shepherds’ Dance). They may be less well known, but they’re equally caustic and unabashed.

Forget about sleeping on the Eve of Santa Tecla and choose from a number of different nightlife options around the city during what are possibly the liveliest hours of the year in Tarragona. When the sun begins to rise, the sound of the gralles (a native Catalan double-reed wind instrument) playing the matinades (matins) will keep you company. And if you really want to do it all, round off the experience with the early-morning departure of the Seguici procession on 23 September and a hearty Tarragona-style breakfast.

If you’re not willing to give up a good night’s sleep, no problem. The Santa Tecla programme offers numerous musical events at more sleep-friendly times so you can fully experience Santa Tecla by night.

This is the climax of the festivities and the one that arouses the strongest emotions in the people of Tarragona. The afternoon procession of 23 September culminates with the entrance of the Saint’s arm relic to the Cathedral, with the Pla de la Seu packed with all the characters in the Seguici who unite in a dance and an outburst of fireworks. The feeling of pandemonium and euphoria will raises goose-bumps on the skin of even the most insensitive individual!

Experiencing the Entrada del Braç has its downside: hours of waiting, crowds of people, and the risk of getting singed or deafened by the fireworks and cacophony of the Seguici. If you want to experience it from a more prudent distance, we recommend that you stay in Plaça de les Cols and reserve yourself a spot to experience one of the most well-loved moments of the Seguici: the descent of the staircase after the Entrada. If you’d rather watch the Entrada during the day, you’ll need to get up very early and head there on the morning of 23 September to watch the processional entry of the city’s coat of arms.

On 24 September, the four local colles raise a pillar, or human tower, of four castellers which ascend and descend the Cathedral steps and then go down the steep Carrer Major to the City Hall balcony. You can enjoy the whole show from Plaça de les Cols, accompanying (at a safe distance) one of the pillars to the end of its route.

With so much festive fun going on, how can you resist another human tower building session? In Plaça de la Font, at midday on 24 September, you can enjoy a delicious glass of vermouth while waiting for the arrival of the four walking pillars. We promise that the climb of each enxaneta (the little child who tops the human towers) to the City Hall balcony is a scene you will never forget.

Would you rather keep the devils at a distance? Once the correfoc has passed by, find a spot close to the Balcony of the Mediterranean and wait for the final spectacular firework display and the lighting of the Visca Santa Tecla message. And if you feel a momentary sadness as Santa Tecla draws to a close, don’t worry; there is less than a year left for everything to start all over again!

Get ready for your Santa Tecla 2019 experience by checking out the comprehensive festival programme.

On tourists and collectors

Tarraco Viva: a full visit to Tarragona and to the past

PrevA journey through the history of Tarragona’s Cathedral cloister
The Central Market: the beating heart of TarragonaNext