A tour of Tarragona’s street art

A stroll around Tarragona can be a very entertaining undertaking, almost without having to move from one neighbourhood to another.

In a city where many buildings are more than two thousand years old, and where you often come across archaeological remains that help to reconstruct its ancient history, there is also room for modern street art.

For the last few years, a number of artists have been filling the walls of abandoned buildings and the windows and façades of demolished houses with colour, painting joy onto more functional or industrial spaces that once went unnoticed by visitors.

The Polígon Cultural organization has now catalogued more than 100 of these artworks in Shikuarat, the urban art archive.

This article proposes a visual tour of the eleven most popular examples of street art displayed in the city of Tarragona.

From Carrer Rera Sant Domènec, often referred to as the “street behind Plaça de la Font”, you come to Plaça dels Sedassos, where there are still some remains of the Roman Circus.

It is difficult not to stop here.

The façade of the central building on the square sports a mural created by Tarragonan painter Carles Arola in 1995.

Its trompe-l’oeil style gives an optical illusion that the figures and objects are real, using the resources of chiaroscuro, perspective and foreshortening.

In this case, the muralist has reproduced the traditional features of Tarragona building façades towards the end of the nineteenth century.

You can see the festive elements typical of popular Tarragona culture such as the Nanos(big heads), which represent figures from the nobility at that time; and the open balconies, like all Mediterranean cities that live facing out to the street, festooned in flowers to evoke springtime…

As it is now 24 years since the mural was painted, this façade has become the most-photographed sight by tourists and travel guides on the city, which recommend it as a must-see sight.

Some 15 years ago, Carrer del Comte was a street in the Part Alta that was practically unknown to most visitors.

Until one day the Tarragona Town Council decided to install some pilons (metal posts) to stop cars parking along it and help improve pedestrian access in the neighbourhood.

It was the local residents who took the initiative to paint them; initially, just a few of them clandestinely by night, but as time went on it has become an annual event, a local and international festival: the Trobada de Sant Agapito Bis, or the International Pilons Parade.

Every year, on the first Saturday of July, organizations, groups and individuals sign up to the initiative to paint the 47 posts on the street, and now even prizes are given out.

This is now a real tourist attraction, and is known as Pilon’s Street, as you can see on a plaque on the wall.

Very close by, on a street running parallel to Carrer Comte, Carrer d’en Mediona, and its adjacent street, Carrer dels Cavallers, the walls and bricked-in doors of some of the building façades portray ancient games in a mural by the Tarragonan painter Màrius Masip.

With this mural, the painter to show present-day children how people used to play when they were their age, about fifty years ago, in the streets and squares of the Part Alta district.

On the walls of Carrer Cavallers and, further on, Carrer de la Nau, you can still find some examples of urban art that have faded with the passing years.

This also draws the attention of visitors passing along these streets.

In 2011, Tarragona held a Forum of Ideas and an urban art festival, Ciutats Creactives, which generated a number of murals by local artists that have changed public spaces.

These murals, which still exist in the Part Alta, can be seen in Plaça de l’Oli, in an old plot that the artists Lluc Queralt, Megan, Fátima and Sr. Tartera regenerated with their mural interventions.

They used the techniques of freehand spray painting and poster art. 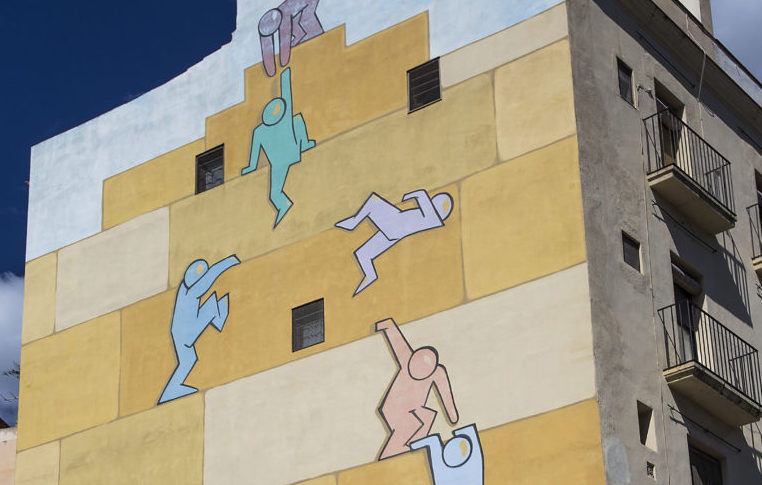 Another of the large murals that never goes unremarked on a visit to the city is the one on the wall of a house on Passeig de Sant Antoni, on the corner with Carrer Portella and one of the entrances to Plaça del Rei, featuring a number of little figures clambering up different walls.

This is one of the most popular photo stops with visitors.

The Rambla Vella, specifically next to Rera San Domènec street, has been the scene of a new display of urban art in the city of Tarragona in 2021. In this case, it is a mural that reproduces one of the structures of the Roman Circus. The project began thanks to the Historical Heritage Department of Tarragona City Council, with the collaboration of the Mutua Catalana Foundation, and was created by the artists Trifon Maynou, Xavi Bonillo and Míriam Abril.

To contemplate this mural properly and get an idea of what the Roman Circus was like, it must be seen from the doors of the church of Sant Francesc.

In the city centre, just behind Plaça Imperial Tàrraco, you can see a huge mural covering more than 400 m².

This was created by Cachetejack, a collective of Valencian designers with an acclaimed international track record, notably Núria Bellver and Raquel Fanjul, on the interior façade of the Espai Jove Kesse, a municipal building that organizes activities for young people in the city as well as an information and support facility. The artist Foham Fonez also collaborated in this mural.

With its message of the empowerment of young women, the mural shows a girl climbing up to overcome challenges and fight against stereotypes and gender violence.

The mural can be seen in its entirety from Plaça Imperial Tàrraco.

The artists’ association Polígon Cultural and the Department of Youth at Tarragona City Council selected these artists to take part in the artistic intervention programme known as Murs que Parlen (Walls that Speak).

If you’ve ever had to take an interurban bus, you’ve almost certainly found yourself admiring a mural that occupies an area of around 200 m2 on the wall of the upper platform at Tarragona Bus Station.

This piece of art is entitled “Art and entropy, a song to life and creation”, and was created by Tarragonan artist Nil Bartolozzi.

The mural, painted using aerosol and acrylic paints and Posca-type felt pens, aims to express the origin of the subject of art as the natural creative energy of order and disorder.

To express this concept, he encouraged the participation of users of the bus station and people were invited to throw paint pellets against the platform wall. He was also inspired by the constant transit of people and buses, and the light and the atmosphere of the bus station.

This is the twelfth piece in the Estació Creativa municipal programme of artistic interventions and the third large-scale mural.

Although a secondary school is not generally a tourist attraction in itself, this particular centre is the exception.

The façade of the Pons d’Icart school has stood out, since 2018, thanks to this large artistic mural in memory of the War of Independence against the French, an armed conflict that Tarragona resisted right up to the last moment.

The street artist Megan was responsible for creating the mural and several students from the school also collaborated in it.

The initiative, which was the idea of its creator and the Pons d’Icart secondary school, was undertaken with the support of Repsol, the Ministry of Education of the Government of Catalonia, and Tarragona City Council.

The intervention formed part of the activities in the “Education for Peace” project that the school organizes each year.

In Tarragona, the neighbourhoods of the Part Alta, the centre and the Part Baixa (lower city) are linked by a main road that slopes down through the city and forms one of its pivotal thoroughfares: Carrer Unió.

Going down this street you come to Plaça de la Mitja Lluna and then continue along Carrer Apodaca, the first of the streets that leads to the Part Baixa and the El Serrallo district, other neighbourhoods where you can see examples of street art.

Two are particularly worth mentioning: the mural on Carrer del Vapor and the one by the Petxina Bridge in El Serrallo.

The residents of El Serrallo have the privilege of having a main gateway to the neighbourhood, painted blue, which tells visitors they are now in the land of fishermen.

This is the Petxina Bridge, a spot where a Tarragona photographer used to display photos of singular people from the neighbourhood just under the bridge in a kind of pop-up art exhibition.

Just to the right-hand side of the bridge you will find a huge art intervention by 15 graffiti artists, illustrators and muralists that is just over one year old, having been created in August 2018.

This is not the first time that graffiti has been painted here: the artist involved in the previous one decided to make way for new interventions in a tribute to the adjective commonly used for this type of art: ephemeral.

This collective exhibition of muralist art, known as ‘Color Zone’, was promoted by the association La Imaginada.

Since 2014, the grey wall of the escalators on Carrer del Vapor has been more cheerful and picturesque. It now reflects the childhood of a resident of the Port district, Juan Carlos, who, when he was small, used to go to El Serrallo to help the fishermen.

His story, which was published in the Diari de Tarragona newspaper in 1984, inspired a young artist from Reus, Aureol Sanz, to portray it in a mural.

This mural is part of the Walls that Speak street art project, an initiative of the Department of Youth of Tarragona City Council and the Tarragona Art Centre, then known as Teler de Llum, with the coordination and direction of the Polígon Cultural organization.

Next to the church of El Serrallo

Since 2002, right next to the church of Sant Pere del Serrallo, people have been able to admire a mural dedicated to the patron saint of the fishermen’s neighbourhood of El Serrallo, Our Lady of Carmen.

The work, commissioned by Tarragona City Council, was designed by Ramon Grau and executed by artists Sánchez Abelló and Ruben Aguilar, and represents an everyday scene in the neighbourhood.

The Walls of Santa Tecla can be found all over Tarragona and its neighbourhoods. The “700 Murs” project aims to show how Tarragona’s patron saint, Santa Tecla, is celebrated in all areas of the city.

This artistic project began between July and September 2021 and commemorates the seven hundredth anniversary of the arrival of the relic of the arm of Santa Tecla in Tarragona.

We invite you to discover the more than 100 examples of street art in the city of Tarragona from the street art archive, Shikuarat, by the Polígon Cultural organization.

PrevThe Port and the Serrallo district – the essential maritime experience of Tarragona
What does Tarragona’s Roman Route include?Next