Twelve reasons to visit Tarragona in 2019

A new year, new things to look forward to and – why not? – new travel plans. The year 2019 could be the year in which you finally discover Tarragona. Lying at the heart of the Costa Daurada and just over an hour by car from Barcelona, the city offers an array of different experiences every month of the year. Heritage, ancient traditions, beaches, fine food and a unique chance to experience the city’s history at first hand are just some of the reasons why Tarragona could be your perfect trip in the coming year, offering a calendar packed with exciting options all year round.

The jewel of the monumental complex that is Tarragona and one of the features that local residents take the most pride in. Declared a World Heritage Site by UNESCO in 2000, Roman Tarraco is still a living site that coexists harmoniously with contemporary Tarragona in every corner. You will find stunning monuments such as the soaring aqueduct of Les Ferreres or the beautifully-positioned amphitheatre; exceptional remains such as the best-preserved circus of the Roman Empire in the Western world, a Paleochristian necropolis, and more than one kilometre of preserved Roman walls. This Roman heritage can easily fill a stay of several days, including visits to the collections in the National Archaeological Museum of Tarragona (MNAT) and the History Museum, plus trips out to the Roman remains in nearby towns such as Altafulla, Constantí and Roda de Berà.

Tarragona embraces the convergence between the traditions of Mediterranean seafood cuisine, a key feature of the fishing district of El Serrallo and the village of Tamarit, and the culinary proposals, both traditional and avant-garde, offered by the restaurants of the Part Alta of Tarragona. Whether you opt for prized local produce such as prawns and anchovies or unique local specialities such as Romesco, or enjoy gastronomic celebrations such as ‘La Part Alta Somriu a la Crisi/The Part Alta shrugs off the crisis’ (which takes place in February),  the cuisine of Tarragona will delight all five senses during your visit. And even more so if you accompany it with one of the wines from the wineries of the Tarragona Designation of Origin, a real guarantee of quality. The Mediterranean Diet, which has also been recognised by UNESCO as Intangible Cultural Heritage, has a very special flavour in Tarragona.

March: let your hair down at the Carnival

The Carnival of Tarragona is one of the most participative carnivals in Catalonia, with around 2,000 people forming part of its biggest event: the Rúa de la Artesanía parade of floats held on Carnival Saturday. If this weren’t reason enough, the comparsas (carnival troupes) of Tarragona are particularly proud of the designs and choreography they come up with every year, constantly surpassing themselves in originality and competing for the coveted prize of assuming the roles of King and Concubine throughout the days during which the city submits to uncontained revelry! The gala event of the Disfressa d’Or (Golden Costume), which this year was brought forward to Sunday 24 February, is bound to amaze you and make you an unconditional fan of one of the best-loved traditions of the people of Tarragona.

April: the spirituality of Holy Week

While the Part Alta of Tarragona exudes charm no matter what time of year it is, during Holy Week it becomes an almost magical scenario of worship in which the darkness, the hypnotic sound of the Armats (armed soldiers) and the beauty of the pasos (episodes from the Passion of Christ, some of which were created by such outstanding artists as Josep Maria Jujol) are simply mesmerizing, whatever your religious beliefs may be. The spirituality of Holy Week culminates on the evening of Good Friday with the procession of the Holy Burial, documented since 1550, in which nineteen pasos take part. Before the departure, the Armats go from church to church to collect each of the pasos in one of the most traditional events of a festival that has been declared a Traditional Festival of National Interest by the Government of Catalonia.

May: a journey back in time with Tarraco Viva

Tarragona not only offers the chance to marvel at the monumental legacy of Roman history; it also offers the opportunity to experience that history for yourself, feeling its very essence and thus getting a better understanding than ever. This is the aim of the annual historical reconstruction festival known as Tarraco Viva, which for a fortnight in May revives the ancient inhabitants of Tarraco to offer a portrait of life during Roman times, with the utmost accuracy, endorsed by historical documentation, as its leitmotif. During this very special period, gladiators return to fight in the amphitheatre once again, life as it was two thousand years ago reawakens beneath the vaults of the Circus, and the area around the Roman walls is transformed into a military encampment.

June: thrill to the spectacle of the Castells (human towers) 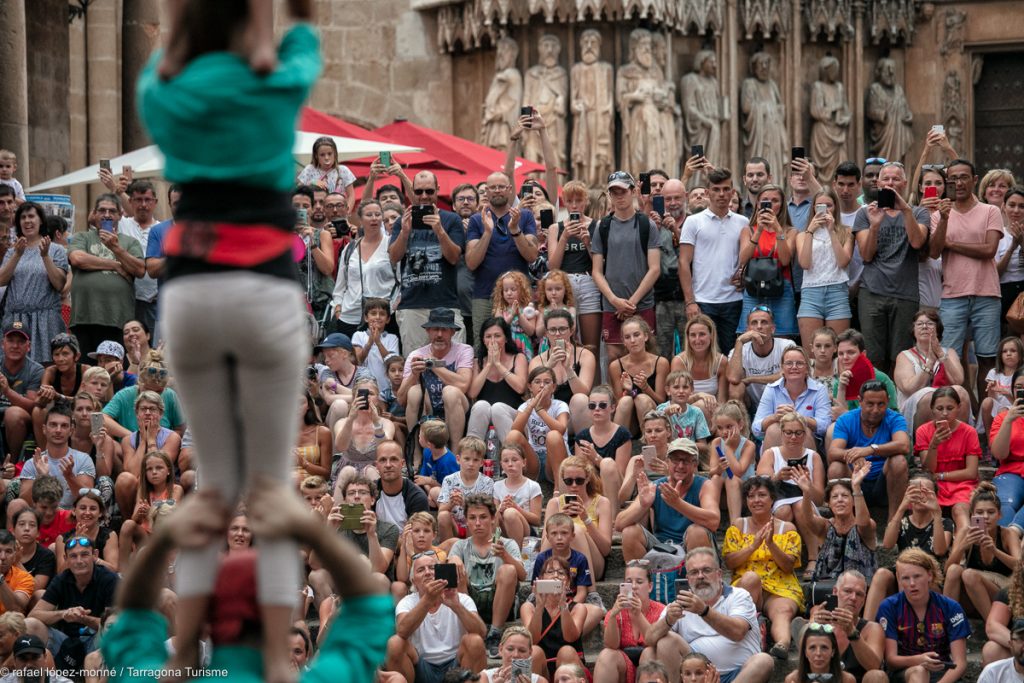 Few emotions can touch that of experiencing a diada castellera (human tower-building event). In Tarragona, the four local collas (teams) start their season every year on St George’s Day (Sant Jordi) in April, but it is from June onwards that the most intensive period really starts with their yearning to reach higher and higher, uniting the efforts of hundreds of castellers. Tarragona Turisme will help you to get a really hands-on, authentic experience of this event, which has been declared as Intangible Cultural Heritage, with the City of Human Towers programme on which you can enjoy some special performances, take part in the rehearsals and marvel at some of the most outstanding displays on the casteller calendar.

With ten kilometres of coastline, the range of beaches in Tarragona is both varied and irresistible, and not just during the summer months. Much of the city’s natural wealth can be found alongside the Mediterranean Sea as part of its Green Ring, including such glorious spots as the beaches Platja Llarga and Punta de la Móra. The hiking path that runs along the coast offers the perfect opportunity to immerse yourself in a unique protected natural space, the Bosc de la Marquesa, which is also the gateway to some of the city’s most beautiful coves. And let’s not forget the happy association between medieval heritage and the Mediterranean Sea that is the castle of Tamarit and its surrounding beaches. Plus, if you’re visiting Tarragona in early July, our most urban beach, Platja del Miracle, makes the ideal setting for enjoying the brilliant lights and colours of the International Firework Competition.

August: the unique experience of Amfiteatrvm

Tarragona’s amphitheatre is a very special venue when night falls, especially in August. The past is more present than ever with the evening performance of Amfiteatrvm, which combines historical recreation, sound and visual effects, exciting history, and projections on giant screens and over the sand of this exceptional monument. All of this will immerse you in the history of Roman Tarraco as never before, and offers an unforgettable memory of your stay in Tarragona.

Tarragona takes to the streets during the second half of September to take part in the festivities that local residents look forward to the whole year: Santa Tecla. Documented since the fourteenth century, the event has been designated a Festival of Tourist Interest by both the Spanish and Catalan governments and represents a truly participative outpouring of Tarragona society. Its spectacular Seguici Popular (popular retinue), the massed crowds of the Baixada de l’Àliga (Descent of the Eagle), the cultural programme and the festival’s high point of the entrance of the reliquary to the Cathedral are just some of the events taking place. Nobody should relinquish the chance to experience the Santa Tecla festival in Tarragona, even if only once in their lives.

October: a stroll around Modernism

The mild Tarragona autumn provides the perfect backdrop for a stroll around the centre of Tarragona to discover what is possibly the city’s least-known heritage: Modernism. On Rambla Nova there are still a number of façades featuring this popular style by architects such as Ramon Salas and Josep Maria Pujol de Barberà, yet the rest of the city also houses many other Modernist gems, including several of the works of leading Modernist architect Josep Maria Jujol (such as the original Metropol Theatre), the Central Market which is back to its proud best following the renovation of its wrought iron work and the trencadís (ceramic tile mosaics) of its original style, and even the first documented work by Antoni Gaudí. 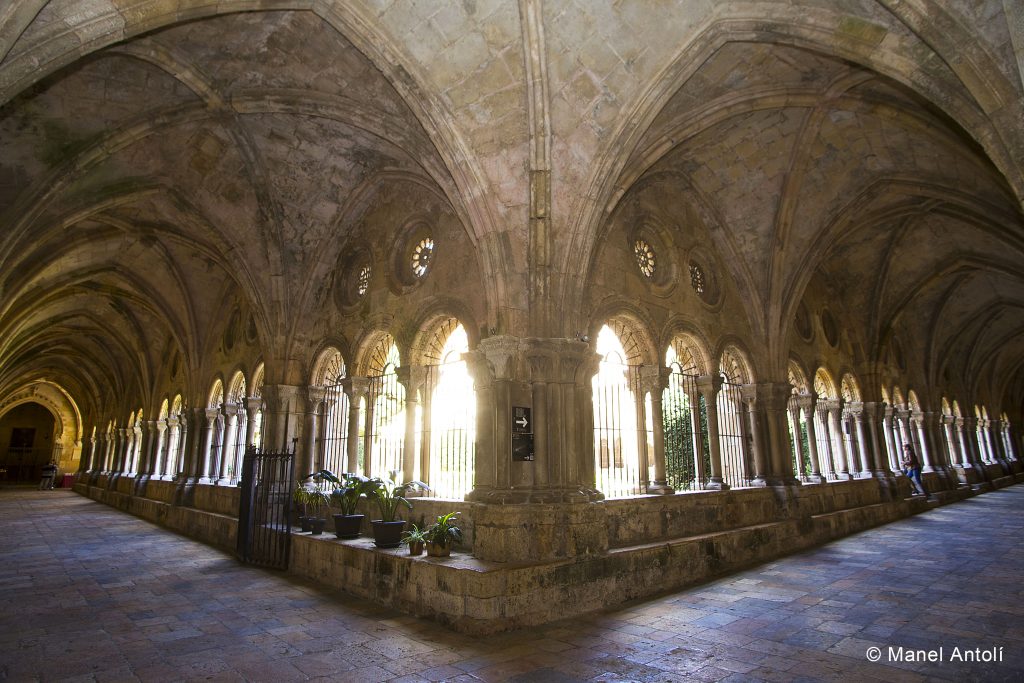 It’s easy for the stunning Cathedral of Tarragona, which presides over the Part Alta from its upper terrace, to eclipse the rest of the city’s medieval legacy. The old quarter of the city, enclosed by its Roman walls, is full of references to the Middle Ages, from the Gothic mansions in the Cathedral Square to Romanesque gems such as the chapel of San Pablo, and buildings constructed from Roman remains such as the Praetorium and the Tower of the Nuns. And, of course, the Cathedral, its cloister and the Diocesan Museum, which are bound to steal your heart.

The Tarragona of eternal spring, of that limpid Mediterranean light, is not immune to the charms of the Christmas festivities. The loss of daylight hours is offset by the stunning evening illuminations that turn streets such as Rambla Nova into an enchanted walk, accompanied by the traditional Christmas Craft Fair which is held every December without fail. The Home dels Nassos (Man of the Noses) offers an amusing counterpart to a New Year’s Day on which hundreds of locals insist, year after year, on plunging into the frigid waters of the Mediterranean, while the icing on the cake is provided by the magical Procession of the Three Kings that has taken place for more than a hundred years.